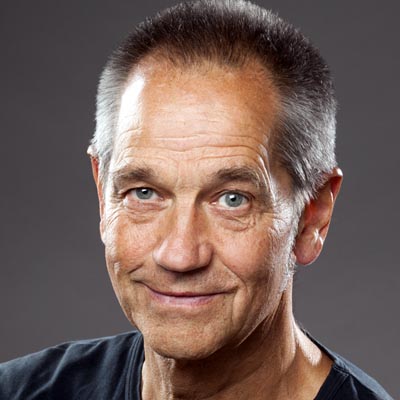 In 2020, the 6th European Shiatsu Congress will be held in Amsterdam. The 2017 edition was in Vienna. But it started way back in 2004, in Kiental, a small village in the Swiss alps, with a mere 200 visitors. To understand the future, you need to know the past. So, time for a word with Wilfried Rappenecker who, together with Mario Binetti, founded the European Shiatsu Congress.

When I speak to Wilfried in his study in Hamburg, he has just returned from giving a workshop in Brussels. That is his job these days: giving workshops and treating clients. Two years ago, he resigned as director from the shiatsu school in Kiental, Switzerland. And he has also resigned as director from the Schule für Shiatsu in Hamburg, which he founded in 1987. It is clear that he is entering a new phase in his life.

Rappenecker (1950) began his career as a medical doctor, but switched to shiatsu after 8 years working in a hospital. He was trained by Ohashi, Saul Goodman and Pauline Sasaki. “There was a strong urge within me to choose shiatsu. My mother and colleagues called me crazy. I told myself I would decide if this was the right choice after three years. But it was clear after six months. It was the best decision of my life.”

What motivates you to practise shiatsu? What does it bring you?
“Mostly, meeting myself. When I started, I longed to be quieter within myself, more at home with myself. I was extremely restless. Now, after all these years, I am learning to become a little naïve from the heart, not trying to protect myself all the time. I am learning to allow things to happen, a particular feeling of being connected to the person with whom I am working. Outwardly, I became interested in questions like What is health? What is life? What is disease? Practising shiatsu and working together with clients and students helps me to answer these questions.”

Your video about shiatsu and ‘Gesundheit’ fits well into the theme of this edition of the Shiatsu Congress: ‘Positive Health’. What does Positive Health mean to you?
“Shiatsu’s strength is that it can support health. It doesn’t fight disease. Many health problems people have are not because they are sick but because they are stuck. To me, Positive Health means to see life positively, to see the opportunity behind the crisis. It’s beautiful when somebody finds a way to go on, a way to go through a crisis, and comes out of it a different person. Because they have found a new way, discovered a new side of life. Shiatsu can help to find this new way.”

In 2004, Rappenecker and Mario Binetti, director of Kientalerhof, founded the first European Shiatsu Congress in the mountains of Kiental, Switzerland, with about 200-250 attendees. Why did you organize this congress?
“I was at a shiatsu symposium in Berlin in 2000. There were only Japanese trainers. And I thought: this is crazy! Where are the European shiatsu teachers? There was no European network at that time. Nobody knew what was going on in other countries. I wanted European shiatsu people to meet, communicate, for the sake of a better shiatsu profession in Europe. And it worked.”

After the first edition, they organized 3 more: in 2007, 2011 and 2014. All hosted in Kiental, a beautiful but remote backdrop, hidden from the public eye. In 2017, Mike Mandl took the European Shiatsu Congress to the centre of Vienna. How did you experience this city version of the European Shiatsu Congress?
“When people meet at a congress, it’s important what topics and teachers you offer. With enough variation of male and female speakers, different countries, different styles. So that students get nourished, shiatsu-wise. But, just as important as this is the mutual experience of being together with all those other shiatsu people. This was a very strong element of Kiental. To be honest: I wasn’t sure if it would work in Vienna. But it did. It was different, not as intimate, but it did work. There was a common experience, not only in the workshops but also outside. I am very much looking forward to Amsterdam, to see how they continue.”

So, the shiatsu congress was initially not meant as a travelling circus?
“No, not all. At the end of the first congress, I said: I will never do this again. Too much work. But then we did it again. And after the 3rd time, we realised it would continue. Then we thought, Kiental is too small. So we spoke to Mike Mandl and sent the congress on a journey. First to Vienna, now to Amsterdam. And after that, in 2023, back to Kiental. We want the roots to stay in Kiental. And 2026? Maybe London. Cliff Andrews is interested.”

Will you give a lecture in Amsterdam? I did not see you in the programme.
“Maybe I will, maybe not. To be honest, I would like to, but they did not ask me. I know it’s not so easy. I have been present at each of the five conferences in the past. And they have to find a nice balance of speakers. So I understand. I will not be pissed off if I am not asked. Many new teachers will show up, so it can go on, it can proceed, the community can grow. That is much more important than my person. ”

Wilfried Rappenecker also writes books on shiatsu. One of them is ‘The Atlas of Shiatsu’, co-author, Meike Kockrick. Here you can find a complete list of his books . Also, don’t forget to take a look at his interesting articles about shiatsu .