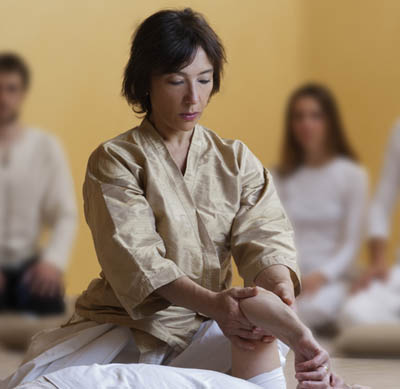 What on earth have dissipative processes, biophotons, solitons, atoms and coherence to do with shiatsu? It is not a common combination. There seems only one logic answer: The Hado Shiatsu style from dr. Patrizia Stefanini. Put on your scientific hat and read on.

Patrizia works as shiatsu practitioner and is principal of the European Shiatsu Institute in Milan and Florence. She is also the creator of Hado Shiatsu, a style built on the theories of modern quantum physics. It may not come as a surprise that she holds a Ph.D. in Health Physics.

What does Hado mean?

“In the Japanese spiritual tradition Hado is the innate transforming power of each thing and each living being. The literal translation of its ideogram is ‘wavelike movement’, analogue to the Ki flow in shiatsu.”

You are the principal of the European Shiatsu Institute with schools in Milan, Florence, Germany and Austria. How many students do your schools have?

Are there many shiatsu schools in Italy?

“Yes, really many. I think there are more than a few hundred. Perhaps Italy is the country with the highest amount of shiatsu schools in Europe. Both, because the diffusion of shiatsu in past years, and because it is relatively easy to start a school. Since 2013 shiatsu has become a free profession regulated by a law in Italy. This improved the perspective of shiatsu practitioners. However, the law does not require specific training. Consequently, the market is close to saturation, due to the presence of many shiatsu practitioners with poor or short training.”

What are the requirements when you study Hado Shiatsu at your school?

“Hado Shiatsu is a Master’s degree offered to the shiatsu graduates, with at least three years of training. A Hado Shiatsu practitioner offers a specialization that is certainly more interesting for a client who is looking for a deeper experience.”

Can modern quantum physics uncover the magic of shiatsu?

Talking about deeper experiences, you combine quantum physics with shiatsu. This is quite something else then, let’s say, Zen Shiatsu. Why did you choose for this combination?

“Modern Quantum Physics is a very effective way to explain living systems, like a human body. Describing a human as a macro quantum system implies a lot of proprieties that fit in with what we perceive through shiatsu touch: dynamic nature, interconnected web and holistic nature”. And what role does ‘coherence’ play in this system?

“Coherence is a concept related to the dynamic nature of reality. Matter is not inert; it is in everlasting fluctuation. Situations manifesting a ‘sense of coherence’ are those that we may define as ‘being in the zone’ or ‘going with the flow’: life movements where, because of an intrinsic state of harmony and wellbeing, everything seems easy. We can consider the degree of coherence in a living system as a measurement parameter for health.”

So being ‘in coherence’ means being healthy?

“Yes, a human being is in a healthy condition when the flow of energy occurs consistently. To be healthy does not require much energy, given that an excess would extinguish the system’s coherence, its dynamic passing from ordered movement to chaos. Illness may ensue when, on losing coherence in the system, energy fails to move and becomes blocked. I find the idea that the quality of life is closely linked to the degree of order and coherence within our energy system intriguing.”

They say: magic is just science we don’t understand yet. Is your biophysical approach to shiatsu uncovering the magic of shiatsu?

“What a great question! In my Hado approach I have some keywords that guide the practice. One is from Prof. Emilio Del Giudice, a theoretical physicist with whom I have been working for years. Once he was asked: ‘What are you working on?’ He looked at me, winking, and replied: ’I am dealing with magic…’. Those were the years we were working on biophysics and touch.”

How do these quantum physics concepts transform into Hado Shiatsu? I’ve heard about a minimum of touch.

“The living organism is optimized to resonate on small stimuli. So an important starting point in a Hado Shiatsu session is that we whisper to cells. The quality of connection counts, not the amount of energy. Ki is information, so it can support synchronic relationship processes. German classical physiology discovered the law of Weber and Fechner, valid for all living beings. This law states that the inner sensation produced by the stimulus is all the greater as the stimulus is smaller.”

Can you give me a sneak preview of the content of your workshop at the ESC? Maybe about the opening and closing of a shiatsu session?

“I have an opening ritual for my session, a moment where I centre myself, open my senses and feel gratitude for the trust of my receiver. It is a sort of setting the field where the shiatsu experience will happen. At the same time I call for support and protection.”
“At the end of the session the closing ritual is a moment where I go for the last touch, grateful for the sharing I could have with my receiver. Then I look for the best way to cut the connection at every level to let my receiver free ‘to adjust’ and go back to his life.”

Finally, Patrizia, what are your expectations about the ESC?

“It is a great occasion for the shiatsu community to meet and share and grow together. I look forward to the Congress because I know many of the other teachers involved. So it will be a great pleasure to meet and hug them.”

Curious about Hado Shiatsu? Visit the workshop of Patrizia Stefanini at the European Shiatsu Congress in Amsterdam.
Or check these articles if you want to dive deeper into the scientific background of Hado Shiatsu and modern quantum physics.
Or read more about Hado shiatsu at  HadoShiatsu.org